Together with other artists Arnold Bode founded the Hessian Secession group, which existed from 1946 to 1949. The small exhibition catalogue tells us that the group’s foundation and agenda were approved by the "Office of Military Government for Greater Hesse Economics Division". The bilingual catalogue features the same motif as the poster. Regarding the motif: Arnold Bode used this image to portray
himself and his Hessian Secession group as a "phoenix, the mythical figure that rises time and again from the ashes. He sketched a phoenix that seems to have just emerged from the flames, with heavy wings and bearing an olive branch in its beak, as an emblem for the catalogue title of the group’s opening exhibition and even had it printed in two colours".

On the back of the offered poster there is a typewritten text dated 30 September 1946, the first day of the exhibition. Featuring a monogram, the text discusses the “use of abstract forms in the visual arts” and assesses the relationship with “art in its most original sense”. In retrospect, this exhibition is a kind of precursor to documenta. Regarding the poster designs, it can be observed that Bode’s early poster from 1946 focuses on a mythical creature, the phoenix, whereas the first poster for documenta 1955 is dominated by the text 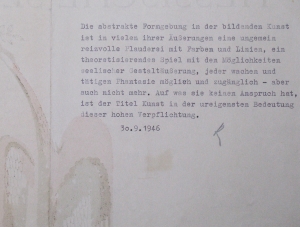